We hope you’ll be able to swing by the Athenaeum, anytime 9am-5pm today (Tuesday, May 8) to join us for our Transcribe-a-Thon focused on Ed Gitre’s “The American Soldier in World War II” project.

A couple of final notes about todays’s events.

Program schedule (we will go live online 5 mins. before each. Please do mute your audio [so we are not inundated with sound] and disable video if you prefer not to be seen):
•    11:30am EDT: Project Introduction, Prof. Ed Gitre
•    12:15pm EDT: Selected Survey Readings, Jennifer Nardine & Christopher Miller
•    1:00pm EDT: WWII-era music, Ted Alt, saxophone

◦    setlist: Summertime, On the Sunny Side of the Street, Over the Rainbow, Don’t Get Around Much Anymore

Link for Media Advisory
Onsite participation:
If you are coming to Athenaeum in-person, we can’t wait to welcome you! We will have laptops available for your use (or bring your own, if you prefer). We find that transcription tends to be a very social activity, so bring a friend (or several) and a picnic lunch!

Finally, stickers! Transcription tallies on May 8th and reported to us by 11:59pm (screen grab of contributions made) garner ranking stickers (final designs attached):

Beginning Monday, April 9, the Athenaeum will host a short series of structured workshops developed to introduce humanities faculty, students, and interested staff to R and Python, specifically for humanities projects. There will be a total of four sessions, two workshops for each programming language. The workshops are intentionally conceived with the absolute beginner in mind. In essence, we hope to provide a pathway for anyone who has become aware that R and Python may be of use to their work and simply need a means to get started.

Sessions will be facilitated by Chris Miller, Nick Bolin (Python), and Rohan Joseph (R). We look forward to hosting participants, who are welcome to join any combination or all of these workshops. We will provide laptops pre-loaded with needed tools for the sessions.

Please do share broadly among your networks, and feel free to send any follow-up questions directly. RSVPs, while not required, are appreciated in advance for a general count. Please contact Chris Miller, Digital Humanities Coordinator for more information or to RSVP. https://lib.vt.edu/spaces/athenaeum.html

Published in Silence, a collection of John Cage’s writings, 45′ for a Speaker is a performative series of lectures that provide insight into specific pieces of the prepared piano repertoire in addition to Cage’s general notions of composition by chance operations and consultation of the I-Ching. Such processes were also central to John Cage’s two artistic residencies in the local area, orchestrated primarily by Ray Kass, in 1983 and 1988 (Mountain Lake Workshop). This performance takes full advantage of the mediated classroom of Athenaeum to project selections from Cage’s New River Watercolors (1988) in complement with Cage-inspired digital art from Tony Obr and Kalak, photographs by LS King, and musical compositions from Bob Pillow and Kalak. Post-performance discussion will focus on Chris’ research on archiving as performance practice and the archives as a space for performance, which was the focus of his recent artistic residency at the Seoul Dance Center.

Professor Matthew Goodrum (STS, VT)
“Celts, Cavemen, and Other Contested Ancestors:  Identifying the Prehistoric Peoples of Europe.”
Athenaeum Classroom (Newman 124)
*refreshments and conversation begin at 2:00p
Abstract
By the middle of the nineteenth century archaeologists had extended human history into a deep prehistory, and soon paleontologists would extend that prehistory back into the geologic past of the Ice Age.  For anthropologists the primary question was to identify who these prehistoric people were and what relationship they bore to modern Europeans or other existing peoples.  My paper examines how anthropologists during the last half of the nineteenth century developed methods to examine and interpret prehistoric skeletons and formulated theories to explain how Europe became populated by successive waves of peoples (races).  I then link this to my earlier research on the origins of paleoanthropology as a scientific discipline.
Please join us this Friday for the first talk in our newly revived Digital Humanities Seminar Series:

Bio and recent projects:
Roshmond “Sum” Patten is a seasoned hip-hop artist, and digital media/marketing professional with over 15 years’ experience. As an artist, he manages an independent music career that features an eclectic body of work, with an indomitable DIY ethic. Professionally he is a creative-for-hire, working on a variety of projects ranging from being the Twitter voice for Donald Glover’s hit TV show Atlanta, to acting as lead strategic partnerships consultant at Stampede Management, and helping Apple Music refine their music discovery algorithm. Sum has served as Music Director for IndieCade International Videogame Festival and is currently on the Advisory Board for Overbrook Entertainment’s mobile app developer, Buzznog. He is currently building out the Digital Action Committee concept, a collective of creatives building awareness campaigns and digital tools for modern activism. Topics the collective approaches include closing the digital divide, leveraging the individual/organizational digital footprint, and creative approaches to constructivist tools.

4/20 – Sylvester A. Johnson
“Can Robots Make Love?: Artificial Intelligence, Human Identity, and the Life of Things.” 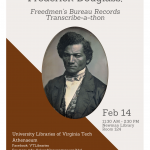 Please join us for an exciting event!

Athenaeum is participating in a national, synchronous celebration of Frederick Douglass’ birthday featuring a document transcribe-a-thon of the Freedmen’s Bureau Papers in collaboration with National Museum of African American History and Culture, Smithsonian Transcription Center, and Colored Conventions Project. An event flyer is attached here.

In order to provide additional support for the event, our FlowGround time on Monday, February 12, 11:30am-1:00pm will be dedicated to STC transcription orientation.

Please do feel free to forward any questions, share the event as broadly as possible, and I hope you’ll join us for this terrific opportunity.
Rider Foley—Assistant Professor, Science, Technology & Society, UVA
“From Engagement to Intervention: Reconstructing Two Events at the Motorola 52nd Street Superfund Site.”
Friday, November 3, 2017

Abstract
Scientific knowledge and technological artifacts are built into a city’s urban fabric. Such knowledge and artifacts in turn affect the lived experiences of the city’s residents. From Jane Jacobs’s streetscapes to Lewis Mumford’s livable city, the constitution of power and authority can be seen in the city’s very infrastructure. Scholars have recently experimented with novel engagements intending to shift de facto power and authority arrangements between citizens and technical experts. However, those experimental engagements are rarely understood as interventions in urban techno-politics. This article aims to reconstruct two interventions in Phoenix, Arizona at the Motorola 52nd Street Superfund Site, the largest urban subsurface contamination zone in the United States. The research design aims to reconstruct two specific interventions through the use a semi-structured analytical framework. Findings suggest the interventions “opened up” technical decisions and government officials later repurposed the participatory technology assessment at their quarterly meeting. The other intervention influenced a binding decision by elected officials. These events suggests how roles and relationships allowed boundaries to be crossed and for experiential and empirical knowledge to be unified and thus influence decisions within the sphere of urban techno-politics. The pursuits of science, technology and society (STS) scholars, I argue, are well positioned to move from engagement to intervention.

END_OF_DOCUMENT_TOKEN_TO_BE_REPLACED

As many of you know, A.D. Carson, Assistant Professor of Hip and Hop and the Global South in the McIntire Department of Music at UVA, will be in the Libraries as a featured panelist for the Digital Literacy Symposium.

A.D. has further and graciously agreed to lead an informal workshop and open discussion, in Athenaeum the following morning, focused on new approaches to the production of knowledge and publication of scholarship. Please do join us for that discussion. Details:
Friday, November 3, 2017